Hailing from Peru, Mexico-based artist Humberto Polar a.k.a Monopolar, crafts eclectic Latin-infused electronic music that pulls liberally from different genres. During the last 15 years Humberto was working hard to create sound that marries Latin American folkloric music and African melodies with Peruvian percussion and Detroit techno. Be it a live performance or one of his famous all-vinyl dj sets, it is being born out of fresh experimentalism and unique personal experience. What is astonishing about Humberto’s body of work is the sheer number of diverse projects in which he was or still is involved.

Starting off as a classically trained jazz guitarist Humberto had to face the fact that the jazz world at large was closed off. After discovering acid house, getting more into electronic music and dealing with a bit of an inner conflict, he finally started producing electronic music of his own. Armed with a Roland MC-505 groovebox, Yamaha RX-21 and Korg Triton he went for building a live performance. In 2000 Polar started producing music together with his friend “Mono” Ramirez. That was the beginning of the Monopolar project. In the next few years the duo got to perform in Berlin, Barcelona, New- York City, Miami, and at various venues across Argentina, Colombia, Venezuela and Mexico.

Around the same time Mono and Polar opened La Sala, a club which is emblematic of Bogota’s electronic music scene development. For nearly 10 years Mono and Polar were running the place, holding their residency at La Sala and bringing to the club artists from all over the world. La Sala became a pivotal part in Bogota nightlife, creating a diverse and collaborative electronic music scene.

In 1999, while touring a lot as a session guitar player, Humberto launched Pantamuzik record label with an ethos to present Latin America’s emergent electronic music to the world. He was genuinely interested in discovering and promoting music of fellow Latin American producers. What started off with 4 compilations released on cds grew into one of the most influential record labels in Latin America which now boasts an impressive catalogue of 51 digital and 5 vinyl releases with remixes done by Deadbeat, Jay Haze, Agaric and other like-minded musicians from around the world. Since 2009 Humberto teamed up with Signal Deluxe and they are running the label together up to now.

When Mono retired and left the project in 2007, Polar went on as solo artist producing music under the same alias. Gradually going completely hardware, resampling himself and employing more synthesizers Monopolar was creating his spellbinding, largely improvisational performances.

His love of the experimental and huge experience of working across disciplines makes it no surprise that Humberto Polar is also making electroacoustic avant-garde music which the artist himself calls sound art and which has been showcased at various art galleries and venues across Europe and Americas. 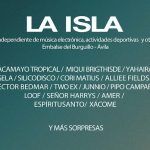